In previous weeks, we have discussed binary. We have also covered how each byte has an address, or identifier, so we can refer to where our variables are actually stored. It turns out, by convention, the addresses for memory use the counting system hexadecimal, where there are 16 digits (0-9 and A-F).

Here is a quick chart to compare decimal, hexadecimal, and binary: 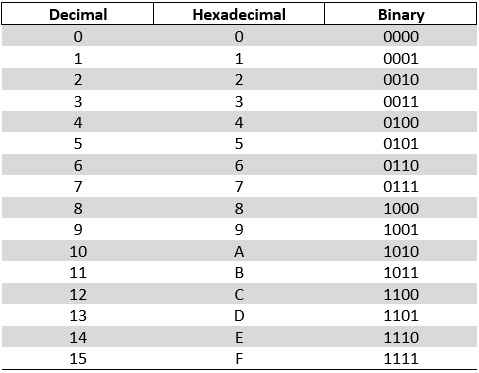 The RGB color system also conventionally uses hexadecimal to describe the amount of each color. For example, 000000 in hexadecimal means 0 of each red, green, and blue, for a color of black. And FF0000 would be 255, or the highest possible, amount of red. With different values for each color, we can represent millions of different colors.

In writing, we can also indicate a value is in hexadecimal by prefixing it with 0x, as in 0x10, where the value is equal to 16 in decimal, as opposed to 10. 0x means nothing to a computer, this is simply to help humans see when hexadecimal will be used.

Pointers provide an alternative way to pass data between functions.

If we use pointers instead, we have the power to pass the actual variable itself. That means that if a change is made in one function, it can impact what happens in other functions.

Let's create a small program that prints out a value of n:

In our computer's memory, there are now 4 bytes somewhere that have the binary value of 50, labeled n.

The bytes for the variable n will start at a unique address and may look something like 0x12345678. In C, we can actually see the address with the & operator, which means "get the address of this variable":

When this program was run, I received the result 0x7ffe5878a42c.

The address of a variable is called a pointer, which we can think of as a value that "points" to a location in the memory. The * operator lets us "go to" the location that a pointer is point to. For example, we can print *&n, where we "go to" the address of n and print out the value of n, 50.

The * is known as the deference operator. It "goes to the reference" and access that data at that location, allowing you to manipulate it at will.

We also have to use the * operator (in an unfortunately confusing way) to declare a variable that we want to be a pointer:

In our computer’s memory, the variables might look like this (each square representing a byte of memory):

We have a pointer, p, with the address of some variable.

We can abstract away the actual value of the addresses now, since they’ll be different as we declare variables in our programs, and simply think of p as “pointing at” some value:

An easier way to look at this is if we have a mailbox labeled "123", with the number "50" inside it. The mailbox would be int n, since it stores an integer. We might have another mailbox with the address “456”, inside of which is the value “123”, which is the address of our other mailbox. This would be int *p, since it’s a pointer to an integer.
A pointer, then, is a data item whose

The simplest pointer available to us in C is the NULL pointer. As you might expect, this pointer points to nothing (a fact which can actually come in handy). When you create a pointer and you don't set its value immediately, you should always set the value of the pointer to NULL.

Let's use a variable string s for a name like EMMA for an example. We should be able to access each character in EMMA with s[0] - s[4]:

It actually turns out that each character is stored in memory at a byte with some address, and s is actually just a pointer with the address of the first character:

Because s is just a pointer to the beginning, only the \0 indicates the end of the string.

In fact, the CS50 Library defines a string with typedef char *string, which just says that we want to name a new type, string, as a char *, or a pointer to a character.

We can compile and run this, and our program works as we’d expect, with the same values of the two integers giving us “Same” and different values “Different”.

Now let's try the same thing, but using strings instead of integers:

If we run the above program we will see that it will give us the result "Different" each time, even when the strings are identical. Why does this happen? Simply, this is caused by how C stores strings in memory. When these are compared, C looks at the addresses of the stings, not the user input data. The strings are stored in different places of memory (pointers), which will return different hexadecimal results when compared.

Now let's look at how we can copy strings. Let's make a simple program:

To actually make a copy of a string, we have to do a little more work:

If we didn’t copy the null terminating character, \0, and tried to print out our string t, printf will continue and print out the unknown, or garbage, values that we have in memory, until it happens to reach a \0, or crashes entirely, since our program might end up trying to read memory that doesn’t belong to it!

It turns out that, after we’re done with memory that we’ve allocated with malloc, we should call free (as in free(t)), which tells our computer that those bytes are no longer useful to our program, so those bytes in memory can be reused again.

If we kept running our program and allocating memory with malloc, but never freed the memory after we were done using it, we would have a memory leak, which will slow down our computer and use up more and more memory until our computer runs out.

valgrind is a command-line tool that we can use to run our program and see if it has any memory leaks. We can run valgrind on our program above with help50 valgrind ./*program* and see, from the error message, that line 10, we allocated memory that we never freed (or “lost”).

So at the end, we can add a line free(t), which won’t change how our program runs, but no errors from valgrind.

We have two colored drinks, purple and green, each of which is in a cup. We want to swap the drinks between the two cups, but we can’t do that without a third cup (temporary variable) to pour one of the drink into first.

Now, let’s say we wanted to swap the values of two integers.

But, if we tried to use that function in a program, we don’t see any changes:

This does not work because the swap function successfully swaps int a and int b, but these are simply copies of int x and int y. When x and y are printed, the copies used by the swap funciton do not alter the actual x and y integers in the main function.

Within our computer’s memory, the different types of data that need to be stored for our program are organized into different sections: 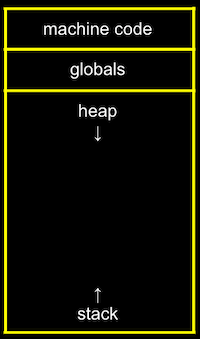 By passing in the address of x and y, our swap function from above can actually work:

We can implement get_int ourselve with a C library function, scanf:

We can try to get a string the same way:

The ability to read data from and write data to files is the primary means of storing persistent data, data that does not disappear when your program stops running.

The abstraction of files that C provides is implemented in a data structure known as a FILE. Almost universally when working with files, we will be using pointers to them, FILE*.

Some of the most common file input/output (I/O) functions that we will be working with are: fopen(), fclose(), fgetc(), fputc(), fread(), and fwrite().

With the ability to use pointers, we can also open files:

Now we can create our own CSV files, files of comma-separated values (like a mini-spreadsheet), programmatically.

We can also write a program that opens a file and tells us if it’s a JPEG (image) file:

We can use these abilities to read and write files, in particular images, and modify them by changing the bytes in them, in this week’s problem set!